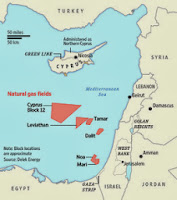 For those looking deeper into the oil and gas industry, Cyprus has announces a massive natural gas discovery in its southern waters. Great news for the tiny nation state, and for the European Union as it desperately needs to diversify its energy imports.

The Wall Street Journal has reported that the find amounts to 30 years of natural gas use for Cyprus, and that it is attached to the 16 trillion cubic feet of gas located in Israel's Leviathan Field. The discovery was made by America's Noble Energy (NYSE: NBL), and it is sure to be a huge boon for the economy in the region.

Ethnic tensions in the region, however, are sure to ignite as the Turkish north and Greek south of the island nation will dispute over new found riches. Turkey does not recognize the independence of Cyprus and it has dispatched a naval escorted research vessel to conduct further tests in the region.