Apple Faces Anti-Trust Suit Over its iBookstore in Europe. Microsoft and Amazon Must be Loving This. 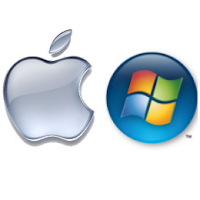 iBookstore, News Corp (Nasdaq: NWSA), CBS (NYSE: CBS), and Pearson's (NYSE: PSO), among others, may have "engaged in anti-competitive practices affecting the sale of e-books in the European Economic Area." This complaint may been brought on by previous complaints by Amazon (Nasdaq: AMZN) about fixed price agreements between publishers and Apple in the region.
Apple charges 30% to sell e-books through its iBookstore, which leaves publishers with ultimate pricing control, while Amazon prefers to retain pricing control for its own retail site.
How much the technological marketplace has changed since the advent of the first PC Wars between Apple and Microsoft (Nasdaq: MSFT). Where previously Microsoft was always the target of antitrust suits, now Apple has gained enough size and clout in the marketplace to be a viable target themselves. As investment website Motley Fool stated, "Bill Gates must be loving this."
Posted by Matthew Clarke, BA (Hons.), B.Ed., MBA. at 2:03 PM