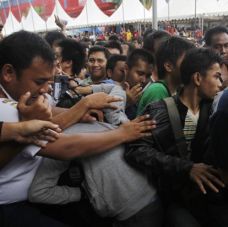 Dozens of Research in Motion customers were injured as more than 5,000 people line-up and stampede for the chance to buy a BlackBerry Bold 9790 in Jakarta, Indonesia.

The $540 phones were being sold at half-price to the first 1,000 customers, which caused a shopping frenzy. Indonesia is a country of over 240 million people and the BlackBerry is the hottest and most popular smart phone in the country. Its BBM, or BlackBerry Messenger service, is increasing in popularity and currently has 6 million users in the developing nation.

Clearly, though BlackBerry is under heavy pressure in North America and Europe as Apple and Android steal market-share, Research in Motion is doing very well in developing nations. Latin America and Asia are keen adopters of the BlackBerry, and the shopping frenzy, though causing some bad press for RIM management overseas, is a clear sign of a vibrant market and business for the company.