Steam and Netflix Show Old Media How to Profit and Generate Revenue in the New Era. With $350,000 per Employee, Steam Leads by Example.

For anyone familiar with Steam, they are aware of the success it has experienced in the video game industry by shirking the traditional brick and mortar distribution model, and deciding on an exclusive on-line presence. Paul Tassi in a recent issue of Forbes notes that Steam has a model for success that other media distribution company's need to follow and emulate. He is absolutely right, and the sooner the better for many of the media dinosaurs.

Amazingly, he notes that at Steam, developers get 70 percent of revenues... traditionally they get 30 percent. Utilizing Steam to sell your software, therefore, is a huge win for developers, and Steam is smart in developing a loyal base among those who develop and create the content that consumers want to buy.

A second statistic is that Steam rakes in $350,000 per employee. This is more than even Apple or Google, and unparalleled in the technology industry.

Essentially, Steam's "ease of use" and fair prices are making piracy a manageable problem for the video game industry according to Paul Tassi.

Instead of trying to use legislation to fight against the headwinds of new technology, developers, content providers, and distributors need to emulate company's like Netlflix and Steam. Revenue and profits are there to be made in the new era of media, company's simply have to innovate and modernize their operations. The examples are already there to follow.
Posted by Matthew Clarke, BA (Hons.), B.Ed., MBA. at 11:12 PM No comments:

Education Reaps Huge Financial Rewards. $570,000 in Gains! The Best Investment for the Future.

"Where is the best place to invest $102,000?" asks a recent study by the Brookings Institute. Their finds are clear and strikingly decisive. It is not stocks, bonds, real estate, et cetera, but education. The average undergraduate degree in the United States will cost approximately $102,000 to earn, but will net about $570,000 more in lifelong earnings than somebody with a high school diploma. Someone with a two year college diploma or associate degree will net $170,000 more during their life.

As a return on investment, this amounts to a 15.2 percent return per year for a 4 Year Degree, and an astounding 20 percent return on a college diploma. Why the higher return on a college diploma? A college graduate will make less money, on average, per year than someone from university, but the opportunity cost was lower. The college graduate started earning money two years earlier, and they paid significantly less money for their education. 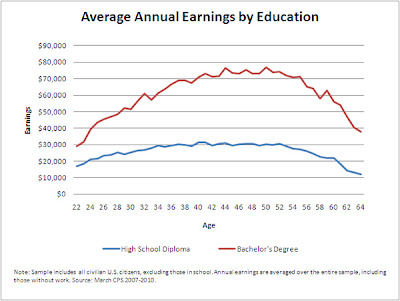 A Chance to Own Facebook. IPO Values Company at $80 to $100 Billion. Zuckerberg Maintains Control.

Facebook plans to raise between $5 and $10 Billion in its upcoming Initial Public Offering, but CEO Mark Zuckerberg should contain complete control. With 854 million active users, the company is expected to be valued at approximately $80 to $100 billion. Zuckerberg's current stake would be worth over $28 billion at estimated levels.

According to Thomson Reuters:

"Its IPO prospectus shows that Facebook generated $3.71 billion in revenue and made $1 billion in net profit last year, up 65 percent from the $606 million it made in 2010."

This would make Facebook one of the most expensive stocks on the market, with a price to earnings multiple of almost 100 times. For investors to generate any kind of long-term profits, this company is going to need to continue growing at a rapid pace for years. Given that it is failing to generate any meaningful income from mobile media devices, this is going to be very difficult.
There will, however, be a tight supply of shares when they issue. With $10 billion being floated, that leaves about 90 percent of the shares locked-up. Of course, insiders could begin liquidating after the IPO, but buying interest should give a floor to share prices. Nonetheless, Intelligent Investors beware of a hot IPO or a technology darling coming to market. Multiples are very, very, high.
Posted by Matthew Clarke, BA (Hons.), B.Ed., MBA. at 10:31 AM No comments: