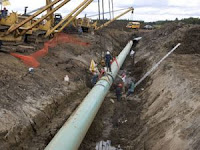 Imperial Oil raises dividend after profits rise 26%. For 2011, the Canadian oil giant is finishing the year with its second highest profit ever, which should make Intelligent Investors very happy. Earnings for the quarter rose from $799 million to $1 billion, and total revenue rose to $8.12 billion.

The end of this year should bring Imperial shareholders another profit jump as the Kearl oil sands mine comes on line with 110,000 barrels of production per day. By 2015, the Kearl mine should be producing 270,000 barrels per day, almost as much as the entire Imperial operations did this quarter

Imperial, which also runs the Esso brand stations across Canada is a good long-term hold for Intelligent Investors, and one of the few companies that already has production increases scheduled into its pipe.