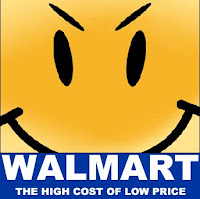 Wal-Mart (NYSE: WMT) recently announced that it is going to begin opening urban stores in Canada. The first concept store will be opened on an old Zellers property that it will be acquiring from Target. The format of the store will be named "Urban 90," and it will be located in the east-end of Toronto.

The new Wal-Mart's are intended to fill a gap that Wal-Mart experiences in Canada currently. Since the company is usually located on very large suburban lots, they have been unable to reach many dense urban buyers. They hope that the new stores will allow them to expand further into a Canadian marketplace that they have largely saturated.

The new Urban 90 format, being located in dense urban environments, is going to hit the traditional retailers and grocers the hardest. Many Giant Tiger, Loblaws (TSE: L), Metro (TSE: MRU.A), and Sobeys banners are located in urban environments that currently are free from Wal-Mart's tentacles. Soon, however, the ubiquitous yellow smiley face will shower Canada's urbanites as well. Canadian retail investors beware!

Happy Investing, and for more info: