Competition is Bad for Business. Search for Monopolies. 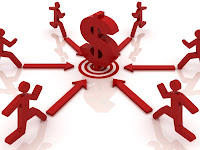 Monopolies are bad for consumers but good for businesses. As an intelligent investor it is always important to be careful to watch the competition that exists in your industries. Investors should think of themselves as owners, and as owners, you do not want your customers to have too much choice in whether or not they buy your products or services.

Ideally, you would be the owner of a business that is the sole provider of the product or service. For instance, in most of the areas in which it operates, CN Rail (TSE:CNR) is the only choice for rail transport. In the same token, CP Rail (TSE:CP) is the only choice where it operates. Why would the two companies choose to split the market in this manner and divide the territory into monopolistic segments? Because it ensures that they can garner enough pricing power, or the ability to raise prices, to ensure that they maintain healthy profits.

The reverse side of this is an industry with lots of competition, which as an owner, makes it difficult to ensure with any degree of certainty that you will continue to generate healthy profit margins in the future. Clothing retail and consumer goods, such as electronics, often fit into this category. A recent article in the Globe and Mail indicated that Sears Canada (TSE:SCC) is suffering under intense competition from Wal-Mart (NYSE:WMT), clothing retailers, appliance and furniture distributors, such as Leon's (TSE:LNF), and soon Target (NYSE:TGT). Customers of Sears can easily go elsewhere to find products similar to what they sell. This creates an inability for Sears to raise prices when their own costs increase. Also, it makes it very difficult for Sears to be sure that its customers will keep coming back. They need to be innovative and change with current tastes and trends in order to remain profitable.

In Canada, our banking industry has ensured itself healthy profit margins by not competing on any large-scale, as have our telecommunications companies, which have really split the country up into a number of key markets where they chooses to operate. Telus (TSE:T), Rogers (TSE:RCI.B), and Bell (TSE:BCE), dominate the wireless market, and through their brands, such as Koodo, Fido, Virgin, Solo, PC Telecom etc., they make it seem like the public has a choice, but really all of the profits are largely split between the three of them. New wireless entrants like Wind Mobile and Mobilicity are already finding it very difficult to crack into the market.

Thus, be careful not to invest in companies or industries with too much competition. As an owner, competition is bad and the ability to raise prices is good. If someone could easily sell a similar product or service without too much start-up investment and costs associated with doing so, it might not bode too well for your fortune.
Posted by Matthew Clarke, BA (Hons.), B.Ed., MBA. at 2:22 PM