Maple Leafs, Toronto FC, the Raptors, and the Marlies Under the Control of Bell and Rogers. Great Cash-Flow for Bell (TSE:BCE) and Rogers (TSE:RCI.B).

Good news for owners of Bell (TSE:BCE) and Rogers (TSE:RCI.B) today as the CRTC has approved their purchase of Maple Leaf Sports and Entertainment (MLSE).

As part of the conditions to the approval, Bell and Rogers have to invest $7.5 million over the next seven years on new sports themed programming by independent Canadian producers. Essentially, a drop in the bucket for the billion dollar Canadian media titans.

MLSE, and now Rogers and Bell, own the Toronto Maple Leafs, the Toronto Raptors, the Toronto FC, the Toronto Marlies, Leafs TV, Gol TV and NBA TV Canada, as well as two other services that have not yet launched. As a whole, MLSE will be a cash-cow for its new owners, and an excellent source of new incomes for future dividend increases.

Since Rogers already owns the Toronto Blue Jays, the Rogers Centre, and Sportsnet, and Bell owns CTV and TSN, as well as a minority ownership stake in the Montreal Canadiens, the two companies are cementing a dominating position in Canadian media and entertainment.

Both Bell and Rogers already support healthy dividends and solid business franchises. The new acquisition bodes well for Intelligent Investors if they are looking for reliable income and cash-flow generation.

Canadian based insurer Great-West Life (TSE:GWO) has been upgraded to a buy by Catalyst Research. In their recent report, they noted that Great-West Life is "operating above expectations" and that the insurer "continues to be a steady earnings performer."

Earnings per share for the last quarter rose 8%, and operating return on equity is close to 16%, the highest among Canada's life insurance companies. Earnings for 2012 are expected to be in the range of $2.05 per share, and with shares currently selling for about $22, that represents a significant value for shareholders.

At only 10 times 2012 earnings, Great-West Life provides an excellent earnings stream to its owners at a better valuation than the overall market and many other financial companies.

The dividend payout ratio (or percentage of the company's earnings that are returned to shareholders in the form of a dividend payment) is expected to be 55%, which is fairly low and sustainable over the longer-term. What is Great-West Life's Dividend Yield? 5.5%! In today's current low-yield environment, a dividend of this stature is hard to pass up, especially when it is backed by healthy earnings power.

For the Intelligent Investor, Great-West represents a strong value and a disciplined choice. Atlanta based Home-Depot (NYSE:HD) announced a 12 percent increase in earnings and a positive outlook for the remainder of the year.

Home-Depot, the largest home improvement retailer in he world, struggled under the weight of the American housing collapse, but now looks poised for continued strength going forward.

The balance sheet of Home-Depot, however, is clean, with about $10 to $11 billion in long-term debt under assets of about $40 billion, so there is little concern in this area: 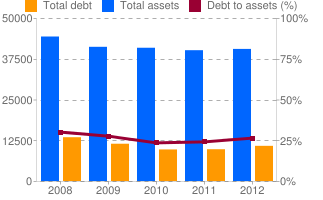 Should the housing market continue to improve, Home-Depot will show more strength, but since the stock is already up almost 80% during the past year, an improvement in the American housing market is clearly already priced into the shares.

For those interested in something a little off the beaten path in the hardware area, investigate Richelieu Hardware Ltd., (TSE:RCH) a Canadian concern with steady growth, a reasonable valuation, and little debt.