Enbridge Pipelines has managed to contain the leak from its pipeline and has limited it to a local lake and river in Michigan. The company says that it should not present a threat to the Great Lakes.

"We do not anticipate that Lake Michigan is at risk," Ralph Dollhopf, the on-scene coordinator for the EPA told reporters Thursday.

A total of almost 4 million barrels of oil has spilled from the Enbridge pipeline, which carries about 30 million litres of oil daily from Griffith, Ind., to Sarnia, Ont. It is much smaller than the leak in the Gulf of Mexico, but still significant. BP spilt a total of about 800 million litres of oil. Much like BP, Enbridge says it is committed to cleaning up anything and everything" that the oil touches outside the pipeline."

Hundreds of workers are now working on scooping away the oil. About 3,600 metres of containment and absorption boom are being laid with the help of 14 skimmers vessels.
"What happens after that is they have these giant vacuums," says Sachedina. "So, the oil is contained, it's sucked into a giant vacuum, and then the oil is put into a tanker truck and disposed of."

However, the nightmare for Enbridge is just starting. U.S. officials claim Enbridge was warned about corrosion in the 41-year-old pipeline back in January! There will, therefore, undoubtedly be some liability and negligence issues for the company to contend with.

The stock, however, is off from $52 to $48 on the news of the disaster. Not nearly enough to warrant making an investment on this news. Surely, Enbridge will face a number of legal hurdles and future development delays with the tarnished image caused by the spill. Luckily for them, people are still thinking of BP's negligence to worry too much about Enbridge.
Posted by Matthew Clarke, BA (Hons.), B.Ed., MBA. at 9:44 AM No comments:

Fresh from its acquisition of Petro-Canada, Suncor energy is gushing profits from the Canadian Oil Sands. The company’s shares climbed as high as $33.89 in morning trading on the Toronto Stock Exchange after it recorded second quarter net earnings of $480 million or 31 cents per share compared to a net loss of $51 million six cents per share for the second quarter of 2009.

The company credited higher oil prices, offset by a stronger Canadian dollar, for the positive results, and thanks to contributions from Petro-Canada, Suncor said its oil sands production reached a record high of 330,000 barrels per day in April. Total upstream production averaged 633,900 barrels of oil equivalent per day.

“Even with the impacts of maintenance, we had one of our best quarters for oil sands production on record,” Suncor CEO Rick George said in a statement.

Given the high risk premium now associated with deep water drilling following the BP fiasco, investors should begin to gravitate towards the oil sands, which though dirty, have a much clearer and planned impact on the environment than does a sudden burst of an oil well into the ocean. At a little over 30 dollars per share, the opportunity to generate over 633,000 barrels of oil per day, largely from Canadian land reserves, is a beautiful thing.

When analysing a real estate investment trust, FFO, or FFO per unit is a key measure of how cash-flow rich the business really is. Remember, real estate operations have significant amounts of depreciation etc. from their buildings, so "income" is not always the best indicator of financial health.

Net operating income increased as well, by a healthy margin.

And last but not least, the company continues to maintain a strong occupancy rate both in Canada and the United States, with no tenant contributing more than 5 percent to revenue!

It is clear that RioCan remains strong and healthy, and with a distribution of 12 cents per month for each unit, this business actually pays you to invest, unlike many other businesses these days.

The Financial Post recently had an article about the recent issues surrounding Shoppers that I talked about below:

Trading near it's 52 Week low on news of the Ontario government's announcement in April that they are reducing the price of generic drugs (to 25% of brand name's), the market has since begun to take a liking to Shoppers again (SC.TO). Currently at 35.89, the stock is only trading at 13 times earnings, a very attractive price for this company, which historically has garnered a premium valuation. With a dividend yield of 2.5%, the stock pays you a reasonable amount to hold onto it until your capital appreciation kicks in.
Why else should you own Shoppers besides it's dividend and valuation?
- Demographics are on their side as our population gets older and they need to intake more medications.
- Debt levels are low, especially for a retailer still very much in a growth stage of its business model (refer to the chart below).
- Revenue is on a strong upward trend and profit margins are remaining healthy and stable (refer to chart below). 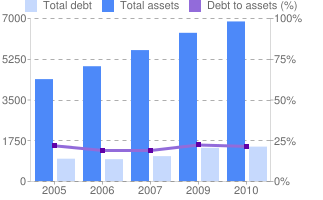 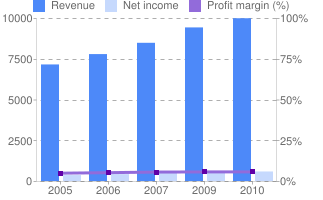 So take a look at including Shoppers as part of your dividend portfolio, and hopefully you will be pleased the next time you see a brand new Shoppers going up in your neighbourhood, as I am sure we all will : )
Posted by Matthew Clarke, BA (Hons.), B.Ed., MBA. at 9:21 AM No comments: