Glittering Goldcorp: How do you evaluate a gold miner and its earnings report?

Gold and precious metals are a perennial favourite for many investors and speculators. It is often viewed by many as a hedge against the risk of inflation destroying our wealth, and the business model can often be relatively clear to understand.

The primary determinant of price movements for many gold stocks is, quite understandably, the price of gold. To recognize whether or not a gold miner is operating effectively, however, you must pour through the quarterly and annual earnings statements. In this article, we will look at Goldcorp's recent earnings release for July 31, 2014 to help understand how to evaluate a gold producer's performance.

According to the company, Goldcorp (TSE: G, NYSE: GG) is "one of the world's fastest growing gold producers. Its low-cost gold production is located in safe jurisdictions in the Americas and remains 100% unhedged." This statement illustrates a number of important points that should be examined more closely when evaluating a gold company for investment:

1) Production levels is one of the primary performance indicators for a gold mining company. The vast majority of a mining company's value lies trapped within the Earth. Unlocking this value is a very expensive and complex process. Increasing or decreasing production levels gives an investor some indication of operational growth in the company, and helps the investor track whether or not the company is on target for any growth plans.

2) Reserves are the metals a mining company still has trapped in the ground for future production. If reserves are declining quarter after quarter, the company will have to start building up reserves so that production does not hit a stand still or eventually decline as existing reserves become more difficult to reach.

There are a couple of primary ways that mining companies increase reserves:

1) They can do it the old fashioned way, by discovering and developing their own mining opportunities. This becomes increasingly more expensive over time as the easier to find deposits are developed and exhausted.

2) They can acquire existing discoveries or developments from other companies. This method tends to be more common for massive multinational gold miners like Goldcorp or Barrick. The significant danger with this method is overpaying for developments that do not pan out, and then the company has to "write down" or essentially take an accounting loss when they admit their mistake.

Mineral reserves are expected to have economic viability, which means an actual likelihood of being developed in the future, whereas "mineral resources" do not necessarily pass this economic viability test. It is important to note the distinction between the two in a company's reports. Goldcorp's reserves are broken down by mineral type, and it is essentially up to the investor to decide whether or not there appears to be significant value located there.

3) Geo-political risk is important to examine for all investments, but with mining companies it tends to be particularly relevant. Gold mining operations that exist in stable and developed economies often have less risk of being shut down due to political concerns, and their value is generally easier to determine. Operations in Canada, the United States, and Australia, therefore, deserve a premium to those produced in less stable countries, such as those located in South America and Africa.

In the image below, we can see the geographical distribution of Goldcorp's 2014 production levels. Note the strong presence in Canada, Mexico, and the United States. This is a positive sign as these areas are generally investment friendly environments for miners. It is important to keep an eye on the location of production, as it can shift over time as companies seek new reserves to replace declining ones. 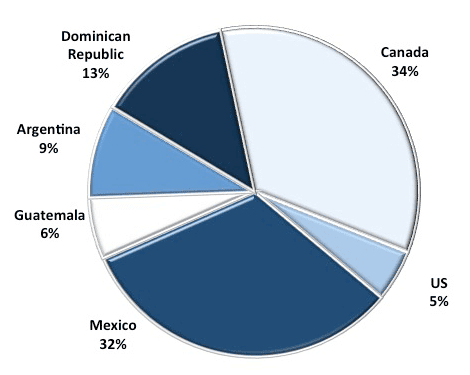 4) All-in-costs, or essentially the total costs that the company calculates it takes to produce one ounce of gold, is important to look at when examining a mining company because it helps us to determine something like a break even point for the company. These costs may vary between mining companies as the metric is not completely standardized, but for Goldcorp these costs include: by-product cash costs, sustaining capital expenditures, corporate administrative expense, exploration and evaluation costs and reclamation cost accretion and amortization.

Essentially, all-in-costs are the miner's way to help define the total costs associated with producing gold. For Goldcorp, the all-in-sustaining cost is estimated to be $852 per ounce of gold. By product costs can be a little confusing, but essentially if a gold mine is also producing copper, the money that the company earns from selling the copper is deducted from the costs of production, and it lowers the all-in-sustaining costs of producing gold.

5) Gold prices are often the primary factor determining the price fluctuations in gold company stock. The difficulty here for the investor is that gold prices act relatively independently of the decisions made by company management. Gold prices can swing wildly from year to year, and company management can try to limit the effects of price changes in the price of gold by implementing hedging strategies.

Hedging strategies primarily sell certain amounts of future production levels (futures) for an agreed upon price. Hedging bets can make a company money if they sell future production at say $1500 per oz and gold prices on the global market decline to $1000. On the other hand, hedging can lose significant amounts of money if future production is sold at a price lower than the actual market price that materializes in the future. In the case of Goldcorp, they have decided to not hedge their sales, which indicates they they are very bullish, or confident that gold prices will rise in the future.

Below is an image illustrating gold prices in U.S. dollars. It highlights prices inflation adjusted and in nominal dollars. Gold prices, though often seen as a natural hedge against inflation, or something that will naturally keep pace with rising prices, are often unpredictable. Because of this, gold mining companies will experience large swings in their share prices as the price of gold rises and falls with changes in investor sentiment and concerns about inflation over time. 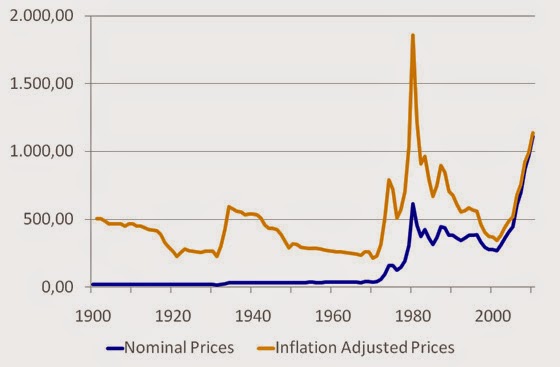 The information above provides a good introduction to understanding some key information to look for when examining the earnings report of a gold mining company. Remember, as for any investment, it is important to consider other factors, such as earnings per share, dividends, investment alternatives, et cetera.

Thanks for reading, and Happy Investing!