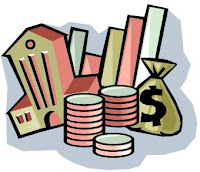 Ally's current situation is an indication that though the financial crisis might be in our rear view mirror, it might still be closer to us than it seems. Shareholders of Canadian banks have to be careful that they know what they really own and watch out for their own bankers left holding a big bag of defaulting U.S. debt. The American government would be more than happy to let us share some of the risk.
Posted by Matthew Clarke, BA (Hons.), B.Ed., MBA. at 7:00 PM